Some major intersections in Gainesville still have no working stoplights, putting drivers and pedestrians in danger, after Hurricane Irma plowed through the state. Repair crews are triaging broken stop lights to fix the busiest ones first.

The city has a traffic management system that connects over 98 percent of the traffic signals in Alachua County. City of Gainesville spokesman Chip Skinner said they can monitor the flow of traffic through these systems to determine which intersections should take priority for repairs.

Until repair crews can get to the intersection, drivers need to heed caution and follow the law.

“When traffic lights are down, people should treat the intersection as a four way stop,” he said. 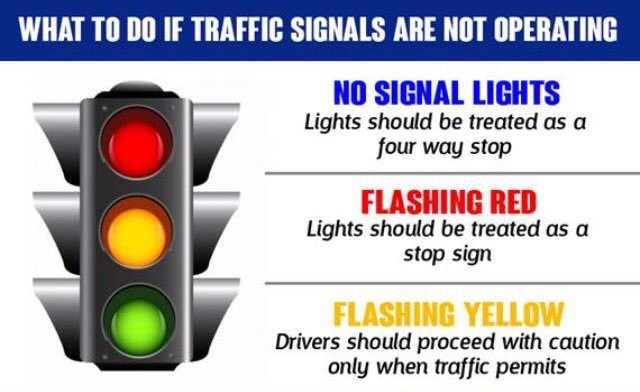 Clearly this needs to be posted again. If the traffic light is out, treat as four-way stop. It’s the law, and to do otherwise is dangerous.

The first person who stops has the right of way. While some drivers are abiding by the law, others are driving straight through.

Pedestrians using the crosswalks are also at higher risk.

“I make sure I am looking all the way— from both sides of the road.” he said.

While coming from Ocala to Gainesville he saw plenty of defective lights.

“Of course you don’t want to get hit by these cars.” he said.

They city had utility crews in place before Hurricane Irma hit, so they could get lights fixed as soon as possible, but all signals aren’t an easy fix.

“Now with some of the intersections, we had to wait for GRU to either restore power or do some other work, so that the signals would be able to be fully functional again,”  Skinner said.

City officials and local law enforcement recommend pedestrians pay close attention to the flow of traffic when crossing intersections with inoperable traffic lights. Walkers should also wear brighter clothing, particularly in the evening, to ensure driver’s can see them.

Having some patience while the city recovers and rebuilds following Hurricane Irma will help everyone.

“Be kind to one another as you continue to go through this process, because we are all under a lot of stress right now with the storm and the recovery effort,” Skinner, said. “We are trying to get back out there and do our recovery process as soon as possible.”

Report defective traffic lights to the 3-1-1 Gainesville app, the Public Works Department, or on the non-emergency line of the Gainesville Police Department, 352-334-2400.

Read this story at WUFT.org